For as long as I can remember, even as a child, I have been fascinated with organizing my world and being “productive.”

Because I like organizing, I’m drawn to sites like LifeHacker and I have a little bit of an obsession for planners, organizers, calendars, to-do lists, etc. I’m always looking for those technology tools that will help me be more efficient, more productive, more more. In my last blog post, I talked about how I often listen to a podcast called Unmistakable Creative, a podcast that is all about productivity and creativity. I recently listened to a podcast featuring Rahaf Harfoush, titled, Technology’s Impact and Our Productivity, Creativity and Humanity. In this podcast, Harfoush talks about having a “meltdown” after seeing a meme that says, “You have the same amount of hours as Beyoncé.” 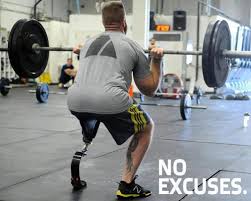 Image of a female with an amputated leg in an advertisement that says, “So…What’s your excuse again?”

Although these images are quite different – one featuring a successful pop star and the other two feature a person with a disability, the message is the same – if other people can achieve great things, then your so-so achievements are completely your fault because you’re not trying hard enough.

Both of these images are “shamespiration,” shaming people as inspiration. “Shamespiration” originated as a critique of weight loss culture that shames people into losing weight such as shows like The Biggest Loser, for example. Perhaps for some people, being told that you’re lazy and that you could achieve success if you just tried harder is motivating, but for most of us, shame actually inhibits our productivity and more importantly, our ability to relate to others with compassion and empathy.

Shamespiration tells us to value others for what they do, rather than for who they are.

As an antidote for the shamespiration, it might be worth re-visiting Brené Brown’s Ted Talk on Listening to Shame. If you haven’t seen this before, I recommend watching it every time you see a shamespiration meme that tells you you’re not good enough.

© 2009-2020. This content on this web site is copyrighted. Content may not be republished, reprinted or repurposed without permission. Short excerpts and links are encouraged, but for permission to quote an entire post, please email me at jaerankim at gmail dot com.