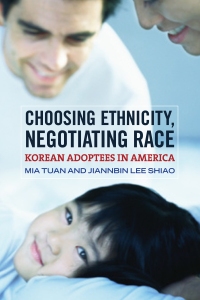 When you are part of a small and specific population, you tend to be hyper-aware of representations of “your group.” So when I heard about Mia Tuan and Jiannbin Lee Shiao’s book, Choosing Ethnicity, Negotiating Race: Korean Adoptees in America, I immediately put out a query to my Korean American friends to see if anyone had heard of the authors or this book.

Since 2006, I have been keeping track of the “call for participants” for research on Korean adoptees that I’ve come across through different venues (most often list-serves and organization newsletters). Since I’ve started counting, there have been 23 calls specifically involving Korean adoptees and another five for transracial adoptees (ETA: that have put out widespread calls for participants- there have been several others I have been aware of that did not advertise or use the internet to find their sample).

Of those, 11 studies specifically involved looking at racial identity; 9 studies sought to understand the Korean adoptee “experience” and 4 were what I call “well-being” or “adjustment” studies. While I get that racial identity is a huge part of understanding the transracial/international/Korean-adoptee experience, I’m waiting for research that stops pathologizing us and am hopeful that more research like Eleana Kim’s work will come out that centers the adoptee as the agent of change and action, not merely a passive subject of study.

There are many aspects of the Korean adoptee experience that are not being studied or researched. I swing between feeling that “my community” is saturated with research while at the same time acknowledging that there is so much more to be learned and understood.

Tuan and Shiao seek to understand how and in what ways Korean Americans identify themselves and how their identity/identities “are chosen, discarded, or revised over time (p.12). So here are my thoughts about this book and how I, as the “subject” (not literally, I was not a participant in this study, but I am part of the population being studied) view the discussion.

I’m always pleased when I read articles/studies that focus on the adult adopted person’s experience (although once again, our voices are mediated through outsiders so some aspects of their analysis will be limited). Because so much of adoption as a practice is focused on the adoption of a child, people tend to think of adoption as an event. But as others have stated, adoption isn’t a single-time event (that would be the finalization of an adoption) – adoption is something that affects adopted persons, birth parents and adoptive parents throughout all of their lives. Traditional studies look at outcomes for children, often fairly soon after placement although there have been some notable exceptions, and rarely has there been the opportunity for longitudinal studies which could follow a cohort of adoptees for a long period of time – especially adulthood.

I bring this up because we’re so focused on making sure the immediate benefits of adoption are studied that we haven’t thoughtfully delved as much into how an adopted person makes sense of their adoption experiences in their 30s, 40s, 50s, 60s and beyond. Other than Brodzinsky and his colleagues, not much research has been conducted on the whole life experiences of adopted persons. An experienced adoptive mom (I call adoptive parents whose children are now adults “experienced”) I know shared with me that she often tells newbie adoptive parents that the majority of their lifelong relationship with their child will be as adults and that pre- or new adoptive parents are often taken aback at this statement.

One of the aspects of the study I was disappointed in was the sample. The authors describe that due to their proximity to the Holt adoption agency, they chose to solicit their sample from families that had adopted through Holt (the authors do acknowledge the limitations of their sample and recruitment, which I appreciated).

In addition to the ease of securing participants for the interviews, having access to Holt enabled the researchers to have case files. I was bothered by this for a few reasons. First, it was never clear to me why the researchers needed the case files and how information they gleaned from the files added to their research.

Second, without understanding why and in what ways information from the case file was considered important for the study adds another layer of concern from the point of view from an adopted person who is unable legally to have access to my adoption files. It is disconcerting to know that someone else, through permission of my adoption agency, can have access to that information without my consent. [ETA 4/19/11: I received an email from Dr. Shaio, informing me that he and Dr. Tuan did not look at case files. In the book (p. 15) they wrote that Holt “provided access to its placement records” and I incorrectly interpreted that to mean case files. I am happy to stand corrected and to know that case files were not accessed for their study.]

As a researcher myself, this is something that I have struggled with. I have participated in research in which I have access to case files that the subject of the files are not allowed to see for themselves. I hope other researchers understand just how privileged they are to have access to such personal information that as the client, I/we can never have. I’m not saying this is necessarily wrong in principle – but I am saying it is an ethical issue that researchers MUST think about. It’s not the same thing as having one’s medical records or case files used for research because when I go to the doctor I sign a form that gives consent for my records to be used in research. As an adopted person (or as a fostered alum would be) I am not given permission to withdraw my consent. I don’t even get asked. Researchers go through the agency or the adoptive parent, not the adopted person.

The other thing I was sensitive to was that the researchers chose to contact the adult adoptees through their families. They sent out letters to adoptive parents, asking them to forward them on to the adoptee. This could only work if the adoptive parent and their adopted child were in contact and/or on speaking terms; and because not all adoptees ARE in contact with their adoptive parents (including some I know of personally who were adopted from Holt) this has the potential to skew the sample because it is dependent on the adoptive parent. Perhaps sending a call for participants through other means in addition to the adoptive parents that still have ties with Holt would have generated a sample that provided a more diverse voice. And once again, it is looking at the adoptee through the lens of the family (adoptive parents), even though the authors were quite clear it was the adult adoptees’ voices they were seeking to understand. From my view, it appeared as though the authors chose not to engage with, or were unaware of, adult adoptee organizations who might have been able to help in soliciting participants.

Despite these concerns, overall I was pleased with much of the book. I especially appreciated that the authors problematized the adoptive parents’ “colorblind” mentality about adopting a child of color – if that color were “yellow” and not “black.” I really liked that the authors expanded David Kirk’s theory of “shared fate” to analyze how adoptiveparents accept/reject racial difference in addition to adoption.

While the stories and words of the adopted Koreans that participated in this study rang familiar in terms of their descriptions of childhood experiences, their more recent discussions pertaining to race, culture, and constructing identity did not fully match the spectrum of adoptees. There was very little discussion of the networking (social and otherwise) of Korean adoptees around the world, which was interesting to me in light of the fact that Holt was the first to do adoptee camps and also have been big in organizing yearly “Motherland” tours. There was one mention of the Gatherings (1999, but not the 2004, 2007 ones), no mention of adoptee list-serves and blogs which have been around since the 1990s, and very little mention of books written by Korean adoptees (including memoirs, anthologies and scholarly work).

In the end I gave this book 3 1/2 stars out of 5. I think that the audience for this book is actually adoptive parents. There would be much for adoptive parents to learn, especially if they are not familiar with the concept of “shared fate” and I think the adoptee voices do, to a large part, mirror much of what I have heard from adult adoptees over the past 12 years I have been involved with the Korean adoptee community.

© 2009-2020. This content on this web site is copyrighted. Content may not be republished, reprinted or repurposed without permission. Short excerpts and links are encouraged, but for permission to quote an entire post, please email me at jaerankim at gmail dot com.