One of the things I take note of is how adoption and foster care is portrayed in popular culture. I happen to like to watch crime/investigation/law shows but don’t have the chance to watch them as they air – so as usual I was up late one night recently when I caught CSI-New York. A character in the episode, portrayed by Sela Ward, was shown with her daughter Ellie, who is played by a multi-racial black teen (Sydney Park). I poked my husband and said, “Really? They are actually going to have a white female lead on a network news show that has a biracial child? I’ll bet she [the daughter] is adopted.”

The joke – or rather, the intuition – was on me, because of course I was right. Unfortunately there are some things you still can’t do on network television, such as having a white female lead with a mixed-race black child unless said child is adopted.

As typical, this information is exchanged through an irritating conversation between Ward’s character Jo and Mac Taylor, played by Gary Sinise, in which the character of Mac waxes on about how Jo “saved” this girl, blah blah blah.  There was a lot of cringe-inducing language regarding Jo’s adoption of Ellie.

Here is a clip of Sela Ward talking about the adoption theme. I didn’t realize that Sela Ward started an “orphanage” in her home state of Mississippi, the Hope Village for Children. They show a clip of an upcoming episode on this video that reveals that “Jo” basically put her daughter’s mother in jail and “rescued” her from becoming a foster child through the CPS system (episode 18). Another clip here.

I’m very excited to announce that I have a chapter in this new anthology, “Parenting as Adoptees”  edited by Adam Chau and Kevin Ost-Vollmers. This book is now available through Amazon as an electronic book and will be printed in book form in the next few months.

The fifteen authors include fourteen parents who were adopted as children, and one chapter was co-written by an adoptee and her daughter. The editors are also both adoptees who are parents, and the illustrator, Kelly J. Brownlee, is an adoptee.

My chapter is titled : Breaking the Silence: Teaching My Children to Talk About Race and Racism. 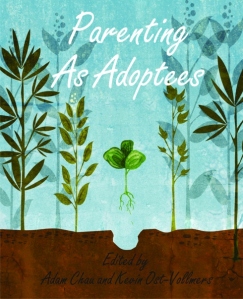 Through fourteen chapters, the authors of Parenting As Adoptees give readers a glimpse into a pivotal phase in life that touches the experiences of many domestic and international adoptees – that of parenting. The authors, who are all adoptees from various walks of life, intertwine their personal narratives and professional experiences, and the results of their efforts are insightful, emotive, and powerful. As Melanie Chung-Sherman, LCSW, LCPAA, PLLC, notes:

“Rarely has the experience of parenting as an adopted person been laid to bear so candidly and vividly. The authors provide a provocative, touching and, at times visceral and unyielding, invitation into their lives as they unearth and piece together the magnitude of parenting when it is interwoven with their adoption narrative. It is a prolific piece that encapsulates the rawness that adoption can bring from unknown histories, abandonment, grief, and identity reconciliation which ultimately reveals the power of resiliency and self-determination as a universal hallmark in parenting.”

Moreover, despite its topical focus, the book will interest individuals within and outside of the adoption community who are not parents. “Parenting As Adoptees,” writes Dr. Indigo Willing, “contributes and sits strongly alongside books by non-adoptees that look at issues to do with ‘the family’, race, ethnicity and migration. As such, this book should appeal to a broad audience interested in these various fields of inquiry.”

You can read an excerpt of my chapter (and two others) on the Parenting as Adoptees website.

Here is the broadcast of the roundtable discussion: click here

The original show focused tightly on the business side of international adoptions spurred by the recent news that Children’s Home Society and Family Services, Minnesota’s longest-running adoption agency, had merged with Lutheran Social Services in large part due to the loss of millions of dollars in revenue over the past few years because of declining numbers of international adoptions. Both the StarTribune and Daily Planet as well as MPR covered the merger and in doing so framed the issue as a matter of supply and demand. Had CHSFS and LSS merely been two businesses and  “adoptable children” been replaced by “widgets” I am sure no one would have given this story much notice.

Here is a link to the original discussion: click here

However, two things happened that led to this story getting a LOT of notice.

First of all, for many reasons, the decline in international adoptions actually is about supply/demand and the commodity that led to the loss of revenue unfortunately is “adoptable children” and that in itself gets attention since no one likes to think of children as merchandise. The focus on the merger and the loss of millions of dollars due to the decrease in the number of international adoptions makes children seem like widgets, even when that is not the intent by the majority of the professionals and other players involved in adoptions. Unfortunately, the host of the Daily Circuit, Tom Weber, kept going back to the decline in numbers, using discourse and rhetoric such as “precipitous drop,” “precipitous decline” and “plummeting.”

Even when the guests, representatives from LSS and CHSFS, Dr. Dana Johnson from the International Adoption Clinic at the U of MN, and an adoptive parent, stated there were good reasons behind some of this decline in number of international adoptions, the continued use of “chicken little” rhetoric (i.e. the sky is falling!) sets the paradigm so strongly in one way that to see it any other way is framed as bad. Deeper discussions into the reasons why declining numbers of international adoptions may be a good thing were not really given space, even as the guest speakers attempted to do so. I see this as an issue with the way the media understands and reports on adoption. Clearly there needs to be more nuanced discussions about adoption in the media. There is a precedent for thoughtful reporting on adoption by public radio outlets – a few years ago Sasha Aslanian produced a wonderful, deeply thought provoking and nuanced series about adoption in her piece, “Finding Home: 50 years of international adoption.” Ms. Aslanian sits only a few feet away from the producers and reporter at the local MPR station and could have been one resource on accurate reporting on adoption.

Why is this distinction important to me? The hyperbole about “falling numbers” within the context only of how this affects adoptive parents does several things:

END_OF_DOCUMENT_TOKEN_TO_BE_REPLACED

© 2009-2019. This content on this web site is copyrighted. Content may not be republished, reprinted or repurposed without permission. Short excerpts and links are encouraged, but for permission to quote an entire post, please email me at jaerankim at gmail dot com.